Comon Invent has started an eNose project at Freeport Grand Bahamas to address the odour situation in the industrial cluster. Check out this article about the project in the The Freeport News below.

Minister for Grand Bahama Dr. Michael Darville led Government Heads of Department on a tour of Capital Investment and Development Projects throughout Central and West Grand Bahama this past Friday, April 7, 2017, which provided the perfect opportunity for those in attendance to witness firsthand the E-Nose System Project in the Freeport Industrial Park that borders the Southern Shore Communities of  Pinder’s Point, Seco Town, Lewis Yard, Hunters, Bevans’ Town, Mack Town and Hawksbill.

The E-Nose System Project provides 24-hour air quality monitoring in the Freeport Industrial Park with data collected determining, if any, the effects of exposure to hazardous chemicals to the environment and health of individuals in the aforementioned residential communities and surrounding areas.

“The Government of The Bahamas contracted the Pan-American Health Organization (PAHO)/World Health Organization (WHO) to complete an Environmental and Health risk Assessment of the Pinder’s Point and Lewis Yard communities as well as the surrounding settlements, which borders the Freeport Industrial Park on Grand Bahama Island nearly two years ago.

“After years of speculation, that the emissions for industrial plants posed serious environmental and health risks to residents, the PAHO/WHO study took place in December 2015 with scientific results indicating by this independent assessment that there are no environmental and health risk factors associated with living in close proximity to the industrial companies; however, there were two primary recommendations made in this report; the first recommendation was for an independently run, year-round environmental monitoring  system to be installed.

“Adhering to the recommendation with the advice of consultants, the Government sought the services of Common Invent Ltd., an international company of the Netherlands that provided a proposal for the installation and commissioning of an E-Nose Odor Monitoring System Network, which monitors incidental releases (hazardous chemical emissions) thereby creating an early warning system for accidental spills and traces the source of incidental emissions and spills. 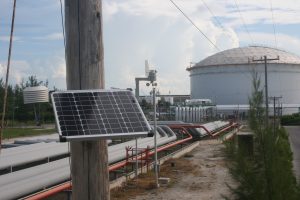 The E-Nose Monitoring System Network offers a state-of-the-art, powerful tool that provides pro-active odor, health and safety control for the responsible authorities, which includes the Bahamas Government in partnership with the Department of Environmental Health Services (DEHS) and the Grand Bahama Port Authority (GBPA) Environmental Department and not only does it sense hazardous chemical emissions, it identifies the emissions by breaking down the molecular structure of the odor whether it is a hydrocarbon and transmits digital information to the independently run monitoring center working on behalf of the Bahamas Government.

Pleased to note that for the first time in Grand Bahama’s history, the Bahamas Government by way of the E-Nose Monitoring System Network is able to not only monitor air quality in close proximity to the Freeport Industrial Park, but also compile data collected for the health and safety of residential areas bordering it, Darville stated, “Certain industries within the Freeport industrial Park emit varying types of chemical odors, which we need to monitor and ensure they are in the normal and acceptable range and if it is not, those companies would be cited.

“There are four pieces of legislation that is being drafted by the Ministry of the Environment & Housing (Environmental Health Department) not only to have the proper legislative framework but also to go after the labor industry in the event that the companies emit harmful chemicals into the air (posing serious risk to environmental health and safety).

“The E-Nose Monitoring System Network can pinpoint exactly where the emission derives from and we can lock the industry/company operations down.

“Over $500,000.00 had been spent on the study alone and all the requisite elements were complete. The Bahamas Government installed the E-Nose Monitoring System Network to protect those in close proximity to the Industrial Park as well as deal appropriately with companies that fall short with meeting the requirement air quality standards emitting hazardous chemicals into the air at the expense of the health and safety of people.”

Revealing that the Ministry for Grand Bahama has learned that the Ministry of the Environment & Housing intends to have DEHS officers along with residents of the communities bordering the Freeport Industrial Park, undergo training to consistently monitor the air-quality, Min. Darville invited DEHS’ Bertha McPhee-Duncanson to further enlighten those on the tour regarding the exercise in which, he claims would assist in making sure residents there are safe and the industries are held accountable for any errors and mistakes made as it regards hazardous chemical emissions.

“Basically the E-Nose Monitoring System Network works by collecting data electronically, measuring all odors emitted and documenting each one by its molecular size which helps to determine and exactly identify the odor as well as if there are any other substances mixed with it, said McPhee-Duncanson, who went onto state, “If the emission is a hydrocarbon, we would be able to identify which of the companies in the Freeport Industrial Park handles such and enforce appropriate disciplinary action.

“Right now we are collecting data over the course of the next six months and once the results are in the consultants would return to Grand Bahama and go over it with those in training to identify the emissions and if need be take the appropriate action.

“Thus far, we have been getting results however, at this present interval those results cannot be shared but we are monitoring it daily; and as it relates to concerns as to whether or not the E-Nose Monitoring Systems are at the right height to truly sense the air-quality as certain chemical emissions are heavier or lighter than others, I can state that indeed each one is mounted at the correct height.” 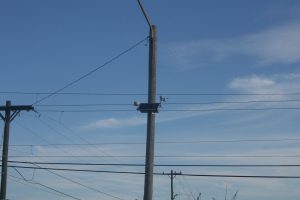 The Minister for Grand Bahama stated that he is pleased with the E-Nose Monitoring System Network, which is used worldwide and is state-of-the-art in design and scope by the creators in the Netherlands.

He also stated that prior to Hurricane Matthew, which made landfall six months ago, the E-Nose Monitoring System Network had to be dismounted and secured, however, the systems have been remounted and are once again online with the consultant team in the Rotterdam area, the Netherlands, assessing the data and working closely with the Ministry of Environment.

“Yes, data collected along with results have already come to us and certainly we have found some interesting information, however, such cannot be revealed at this time.

“Personally, I am confident that in the months and years ahead we will be able to cite those individual companies in the Freeport Industrial Park that violate the level of the International Standard of Emissions in this part of the world.

“Again, 21 E-Nose Monitoring Systems are in the Freeport Industrial Park and we plan to expand this as we look at other developments in the area; this monitoring is being done in collaboration with the GBPA Environmental Department and as a part of the recommendations of the PAHO/WHO all of this must be done with a team of residents so that there can be a degree of comfort for all concerned.

“Once we begin hosting Town Hall Meetings within these communities, we will put a small team together that will work very closely with the arm of the Ministry of the Environment, DEHS and the GBPA Environmental Health Department that will be monitoring the data.

“Again this is an initiative the Ministry for Grand Bahama and Central Government has been working on for quite a while now and is a recommendation of the Environmental and Health Risk Assessment for the Pinder’s Point, Lewis Yard and surrounding areas by PAHO/WHO that is already in place with the second phase of the recommendations, which is Safety Assessment Initiative that is being conducted by the ATIA Group of the Netherlands whose report should be in very shortly.

“The report should provide information and recommendations regarding the risks as it relates to natural disasters and fire in close proximity to the Freeport Industrial Park and we are working diligently to fulfill the PAHO/WHO recommendations which are to monitor air-quality, conduct a complete environment and health risk assessment as well as a safety risk assessment with reports coming in by the end of the month,” Min. Darville revealed.