Minister for Grand Bahama, Dr. Michael Darville, in his recent contribution to the 2016/2017 Budget Debate shared the findings of the World Health Organization (WHO) and Pan American Health Organization’s  (PAHO) assessment with respect to environmental concerns associated with the industrial parks.

The groups were contracted by the government in 2014 to complete an environmental and health risk assessment in the Lewis Yard and Pinder’s Point areas, with respect to the pollution concerns many residents of the area have expressed over the years.

He pointed out that the assessment noted that there are no environmental and health risk factors associated with living in the surrounding area of the industrial park. 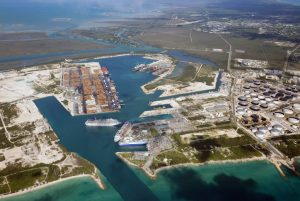 “Mr. Speaker as I would’ve mentioned in the midterm debate, PAHO/WHO were contracted by the government of The Bahamas to complete an Environment and Health Risk Assessment of Lewis Yard, Pinder’s Point and the surrounding settlements, to determine, if any, the effects of exposure to hazardous chemicals, to the environment and health of individuals in the residential areas, which border the Freeport Industrial Park, on Grand Bahama.

“This study concluded in December 2015. It was brought to the attention of the Attorney General’s (AG) office, it passed through Cabinet and I am happy to report to this Honorable House that after years of speculation, it has been scientifically proven by this independent assessment that there are no environmental and health risk factors associated with living in close proximity to the industrial companies,” stated Darville.

Although no environmental and health risk factors were determined to the residents of the Pinder’s Point, Lewis Yard and surrounding areas, based on the proximity to the industrial area, Darville noted that two recommendations were outlined in the report by PAHO and WHO, which he informed the government will take into considerations and act upon.

“Nevertheless, Mr. Speaker, there were two primary recommendations made in this report; and I am satisfied that my ministry, in conjunction with the Ministry of Environment and Housing, that we are making significant strides to ensure that each are carried out.

“Mr. Speaker, the first recommendation was for an independently run and year-round environmental monitoring system to be put in place. As a result, my ministry, with the advice of our consultants, sought the services of an international company from the Netherlands called Comon Invent Ltd, for providing a proposal for the installation and commissioning of an ‘eNose’ odor monitoring network, which will monitor incidental releases, around the industrial sector, create an early warning system for accidental spills, and trace the source of incidental emissions and spills.”

The Minister for Grand Bahama acknowledged that the government has approved the proposal and the necessary hardware, which includes 20 solar powered and four wind vane devices, expected to arrive on island at the end of June.

“Mr. Speaker, this state of the art eNose monitoring network, will offer a powerful management tool for a pro-active odor, health and safety control for the responsible authorities, which include the government of the Bahamas, the Department of Environmental Health, and the Environmental Department of the Grand Bahama Port Authority (GBPA).

“I wish to reiterate one of the conclusions of the report, which states that during the monitoring period, and based on air and water sampling in the Pinder’s point Lewis Yard and surrounding areas, no evidence was found of harmful chemical exposure on a day to day basis in the affected residential areas,” added Darville.

According to Darville, the second recommendation made by the PAHO and WHO assessment suggested that a professional safety assessment, be conducted, relative to the potential threat of fires, quakes, hurricanes, and explosions, to communities of Pinder’s Point and Lewis Yard and the surrounding areas. The experts suggested the second recommendation in order to determine if relocation of residents is a necessity.

“Mr. Speaker, I am also pleased to report to this honorable house that at present, The Antea Group, an international engineering and environmental consulting firm specializing in full-service solutions in the fields of environment, infrastructure, urban planning and water, is finalizing a detailed proposal for an independent safety assessment, which should begin shortly, and be completed before the end of this year.

“Mr. Speaker, I wish, through you, to once again appeal to the residents of Pinder’s Point, Lewis Yard and the surrounding areas, for their full support during this second and final phase of the assessment, which will finally address the question of possible relocation; and to reassure them that this administration is investing much time, effort and resources to ensure that you are and remain safe and healthy in their respected environments,” Darville added.

“As the Ministry for Grand Bahama along with PAHO and WHO representatives held a town hall meeting in April of last year, with the residents of Pinder’s Point, Lewis Yard and the surrounding areas following the completing of the first phase of the study, he assured the House that similar town hall meetings will continue to take place in the very near future.

“Over the next few weeks we will be in contact with the MP for Central Grand Bahama, the residents of Lewis Yard, Pinder’s Point and surrounding areas and our consultants where we will have the necessary town meetings to go into the nuts and bolts of this report and what it means to the residents of those communities,” concluded Darville.