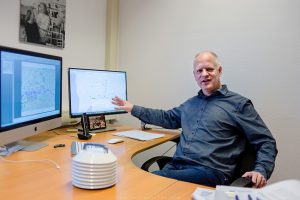 Smelling something wrong? The eNose tells you what happens

The electronic nose is actually based on the principle of bionic simulation of human olfactory system of odor detection. Hundred years ago the famous inventor Bell has proposed the idea of ​​detecting the smell, but until the last century 50 years after the relevant research began to have substantial progress. From the 80s of last century, Europe and the United States began to develop practical odor detection technology, and gradually developed products. Today, the electronic nose has been applied to environmental monitoring, security, traffic safety, medical and other fields. Simon was originally an electrical engineer in the Delft University of Technology’s laboratory, specializing in the development of smart sensing components. From the early 90s of last century, he founded his own company Comon Invent and began to develop the electronic nose.

Simon is on the computer to open another map of the world, marked above the global air pollution in the most serious countries and regions. China and the United States, of course, the two most serious pollution, followed by India, and let me surprise is the Netherlands Rotterdam port area is the worst place in Europe the air quality. Simon explained that because of the busy transportation of the ports and the surrounding chemical plants and large oil storage tanks, gas leaks are inevitable during production, transportation and handling. The wind will blow these gases to nearby neighborhoods.

In order to monitor the air pollution situation in the region in real time, the Dutch Government invested 15 million euros to install and maintain high-precision air quality analysis system. But people are more sensitive to odor than gas detectors. If the alarm is set according to the safety threshold, the threshold has not yet been reached and the inhabitant has smelled it. Moreover, this air quality analysis system is only updated every hour, so a gas emission from a ship caused by a leakage can be smelled by residents before the system could pick up on it. Complainers make a  phone call to the environmental protection department about the smell but the environmental protection agency will be unable to find the source of the problem because the ship might be already gone. This could easily cause dissatisfaction by residents. The electronic nose can mimic the human nose and can realtime detect changes in air quality that can have an annoying affect for the residents. Hereby it can be much easier and faster to detect and trace sources of odourous emissions that cause annoyance to residents in the nearby area.

Simon and his team devised an electronic odor detection system specifically designed to detect specific odors.  The system captures odors, measures intensity and direction, analyzes types, and automatically matches samples in the system with small electronic sensors throughout an area. By tracking the sensor data, Environmental protection departments and enterprises find the source of smell earlier, and through the air quality analysis system to immediately determine the pollution of the gas. The relevant enterprises can be found in a very short period of time and treatment of pollution sources can be started.

Experiments have found that under the same conditions, the sensitivity of the electrical nose is far more than the sensitivity of human nose. Before people can smell the smell, the electric nose has found the problem, locking the source. Companies can immediately control and remove the pollution. Even if a small amount of smell is blown to residential areas, residents call in complaints. Environmental protection departments can immediately tell the residents where the problem and inform the solution. Before the installation of the electrical nose system of 250 sensors in the Port of Rotterdam, the local Environmental Protection Agency had received more than 600 odour complaints a year from people about one particular company. Since the eNose network in the Port of Rotterdam has been installed this reduced to around 20 a year, thanks to the information of 250 eNose sensors in the area. 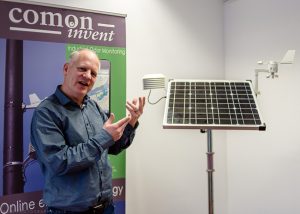 Simon introduces how the eNose works

In the case of Rotterdam harbor, the eNose system united the government, the enterprises and the local authorities together to solve the environmental problem. Through sharing information and education, each part is aware of and plays their roles very well. It helps to reduce environmental stress of the residential areas. In the meantime, the data collected from different projects in Rotterdam, Amsterdam, Oman, and South Africa and the routine sampling help to enlarge the database. The eNose becomes more intelligent and accurate this way.

Exhale and I can tell you if you are sick

Simon introduced his new cooperation with AMC in developing eNose diagnostic system, called the Spironose. Since 2010, Comon Invent started to provide technical support to the research in AMC. Thousand samples are already collected, and progress is making in assisting diagnosis. Simon hopes the Spironose can be 99.9% accurate in 10 years to lower the cost and difficulty of diagnosis, and contribute more to the detection and control of epidemic diseases.

Not selling products, but providing solutions

Comon Invent never sells single products to their customers. They want to provide solutions to problems customers have. Since his first case of helping children avoiding unconscious urination, he sets up his goal of helping people with his service. He hopes the eNose can be more intelligent and accurate so that more problems can be solved by it.

Lennart VerhoefMonitoring the environment, diagnosing illness and self-learning, is the eNose pushing the boundary to the unlimited?01.20.2017