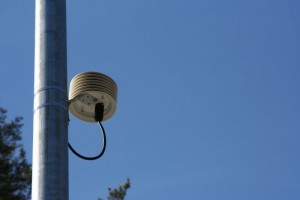 Last week 21 eNoses and 4 windsensors were installed in the Muuga Port and Maardu region in Estonia. The innovative electronic nose sensors, or eNoses can be used to continuously monitor the chemical composition in ambient air. The eNoses are installed at various locations around terminals, industry and residential area to monitor both odorous and non-odorous gas emissions.

The positions of the eNoses can be changed, if necessary, depending on the area most problems are detected. A similar system operates in the Port of Rotterdam in the Netherlands since 2008 (We-nose).

“The Rotterdam port area now has 150 eNoses, and are planning to increase the number to around 300 eNoses in 2016. /…/ Partly due to this eNose network and cooperation of all stakeholders in the port area (EPA, companies, municipalities and port authority) there are less complaints,” explains Lennart Verhoef of Comon Invent, Business Development “ETV.

Please watch item in Estonian TV News via this link:

The eNose itself does not eliminate the odour problem. However, it gives an early indication to operators and inspectors that something might be wrong and needs to be done to prevent or limit an incident.

“Muuga port area is characterized by operations of industrial companies whose activities could lead to odors in the surrounding area. It is often difficult to identify what and where the smells originate. Now, however, we can according to business activities also pose potential gas mixture into a database, which could allow for rapid emission source tracking”said EERC Air Quality management Head of the Department. 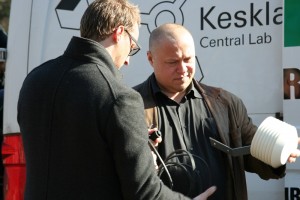 The impact on air quality in the region pressures businesses to implement additional measures and to draw up an action plan for reducing the presence of fragrance.

Muuga, Maardu and Randvere people have complained about the air quality over many years, such as last year, the environmental inspectorate received 206 complaints.

“In most reported cases, the unpleasant odors indicate fuel as cause of the disturbance. People complained about the smell of oil, gas and the smell of gasoline,” said Chief Inspector of Environmental inspectorate Reelika Mountain.

The eNose project in the Muuga area is a cooperation by the Environmental Research Centre, Environment Agency, Ministry of Environment, the Environmental Inspectorate, the Port of Tallinn and Muuga port operating terminals – Vopak E.O.S., Vesta Terminal Tallinn OU and Oiltanking Tallinn AS.