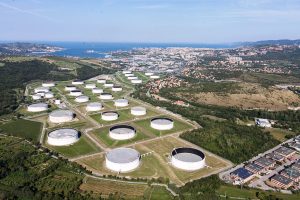 This month TAL Trieste commissioned a network of 12 eNoses surrounding the tank farm San Dorligo in Trieste. The eNose network will continuously monitor changes in air composition in and around the tank farm vicinity. The eNose network provides TAL with additional information about the rise and spread of emissions and can be used as a tool for pro-active odour emission management.

Tank farm San Dorligo della Valle is connected to the SIOT Marine Terminal which is located in the Bay of Muggia in the Gulf of Trieste. SIOT Marine Terminal is the starting point of the TAL (TransAlpine Pipeline) system: averaging 41 million tons of crude oil unloaded annually, TAL accounts for 70% of the traffic in the Port of Trieste. This makes it the busiest oil terminal in Italy and the second busiest in the Mediterranean area. Each oil tanker which docks at the marine terminal has a significant economic impact on the local area. At the Marine Terminal crude oil is unloaded at the piers and transported via four pipelines to the tank farm of San Dorligo della Valle. The San Dorligo tank farm, where the crude oil is stored and handled, is located in the south-east of the industrial area of Trieste.