Odour management at ports brings a breath of fresh air.

There’s nothing quite so evocative as a smell: a freshly printed book; a delicious roast meal with all the trimmings; a bunch of hand-picked flowers.

However in certain businesses, odour problems can leave a proverbial bad smell lingering in the air unless solved and ports are no exception. 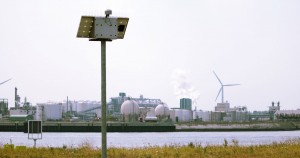 Markus Dalini, technical manager of Ferryl Sales, says that several types of cargo cause bad odours in cargo holds, terminals, containers or storage facilities. “Bad odours can be caused by fish and animal smells, garbage and waste, as well as cigarette smoke and mildew. When bad odours occur, it is important that they are removed.”

However, bad odours can also potentially occur from other sources on board vessels, arising in areas such as sanitary installations, mess-rooms, and kitchens.

Ellen Kaasik, head of quality and environmental management at the Port of Tallinn, says that one major issue with respect to odours comes from handling of oil and oil products in the port. Here, the transit of oil products is concentrated mainly in its Muuga Harbour, where the handling of oil products is performed on nine berths. There are three large liquid bulk storage and transhipment terminals: Vopak E.O.S. (storage capacity: 1,026,000 m3), Vesta Terminal Tallinn (405,000 m3) and Oiltanking (78,550 m3). In addition, Neste Eesti (26,000 m3) and Nynas Terminal (14,600 m3) also operate at Muuga Harbour.

Ms Kaasik says that strong, odorous emissions can occur during the various handling stages, such as cleaning of railway carriages, loading storage tanks, loading vessels or mixing, heating and homogenisation. Emitted odours may then spread towards nearby communities, annoying the residents.

“The residential areas nearby Muuga harbour have been complaining of bad air quality and bad smells during several years,” says Ms Kaasik. “The number of complaints about the bad air quality and unpleasant smell from local population to Environmental Inspectorate have been increased since 2012.” 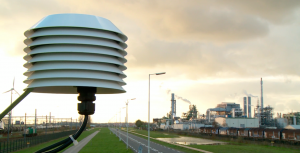 Ports and terminals need to keep on top of the problem from potentially adverse odours from the outside world as well. For example, a tank terminal monitors emissions that come from sources outside the terminal boundaries, which can disperse over the terminal and Port of Amsterdam also keeps a careful eye on nearby oil terminals and other businesses that could possibly emit adverse odours.

Getting rid of bad odours requires the right approach, and one that fits each kind of troublesome smell. For cargo, Mr Dalini explains that various types of cleaning agents can remove what has caused the smell, or mask bad smells, but the smell may linger so that it can adversely affect other cargoes. He adds that conventional air-fresheners can work to mask unpleasant smells, but the root of the problem (the bacteria) needs to be got rid of. “By producing a stronger smell that is more pleasant, bad smells can be overlooked, but the bacteria that is often causing the bad smell, and indeed the bad smell itself, is still present.”

Ms Kaasik says that in co-operation with the oil terminal operators of the Muuga Harbour, a management system for air pollution monitoring and actions for pollution reduction has been developed.

One of the main methods of managing odours is used by a considerable number of worldwide ports including the Ports of Tallinn, Rotterdam, Amsterdam and Sohar. The Electronic Nose (or eNose) is a system that constantly monitors changes in air composition, and around 300 of these have been introduced to do so at ports.

Simon Bootsma of Comon Invent BV explains that the core of the eNose is an array of gas sensors. When the gas sensor is powered, oxide radicals are electrically attracted to lattice defects at the surface of the active layer of the device, which can easily detach when reactive airborne molecules approach the active layer: hence, the conductivity of the sensors depends on the interaction of oxide radicals between the surface of the sensor and proximate reactive molecules in the air.

The eNoses are susceptible to almost every reactive trace gas in ambient air. “This makes eNoses suitable for establishing grids that allow for the detection of the raise and spread of gaseous emissions,” says Mr Bootsma. “The eNoses can be trained to monitor the area around technical installations with emissions sources. The eNoses monitor the source area with a high frequency (typically one-minute resolution) and can alert in case of unexpected or anomalous emissions. Since these emissions possess some odorous content as well, the eNose networks can be used for odour management too.”

The Port of Rotterdam was one of the early adopters of the eNose. In the early part of 2004, a large oil refinery and an oil storage company in the Port conducted the first trails and experiments on their sites. In 2008, the DCMR EPA Rijnmond also started the first project with the same eNose technology. “The first trials showed promising results and continued to a three-year project,” says Mr Bootsma. “Between 2010 and 2013, a network of 30 eNoses was realised. 15 eNoses were installed at the petrochemical complex in the port area and 15 eNoses were erected in the surrounding cities.”

The eNose has been used at other ports, including the Port of Tallinn. “The eNose detects anomalies in the air composition caused by the presence of reactive trace gases in the environment,” says Ms Kaasik. “Such anomalies may be caused by emissions of gaseous compounds emitted from products being produced, stored or handled in the port. They may also be caused by the passing of gas plumes emitted at neighbouring companies. The eNose data is displayed on the dedicated web based tool, which is a graphical user interface that displays the actual status of the eNose by means of a coloured ball on GIS co-ordinates of each eNose. The colour of the ball represents the actual gas composition that is detected by the eNose. If the eNose network is sufficiently dense and the eNoses are mounted at appropriate locations, the eNose can act as an early warning system to the oil companies. If the companies act adequately, they can reduce the risk of odour nuisance.”

Meanwhile, three dozen eNoses have been installed by Comon Invent in the Port of Amsterdam around the North Sea-canal, nearby oil terminals and any other businesses that could potentially release problematic odours. As part of the GeurinZicht project initiated by the port along with EPA North Sea Canal Area and the Province of North-Holland, the aim is to improve the quality of life in and around the area of the port.

Such devices and innovations are a breath of fresh air for ports. But there is still much to do. As Ms Kaasik sums up: “In addition to ‘e-sensing’ technologies, the loading and unloading technologies and processes of oil products in the terminals should be harmonised and new technical solutions should be developed by cargo operators to minimise emissions.”